An interview with Trevor Wishart - pt.1 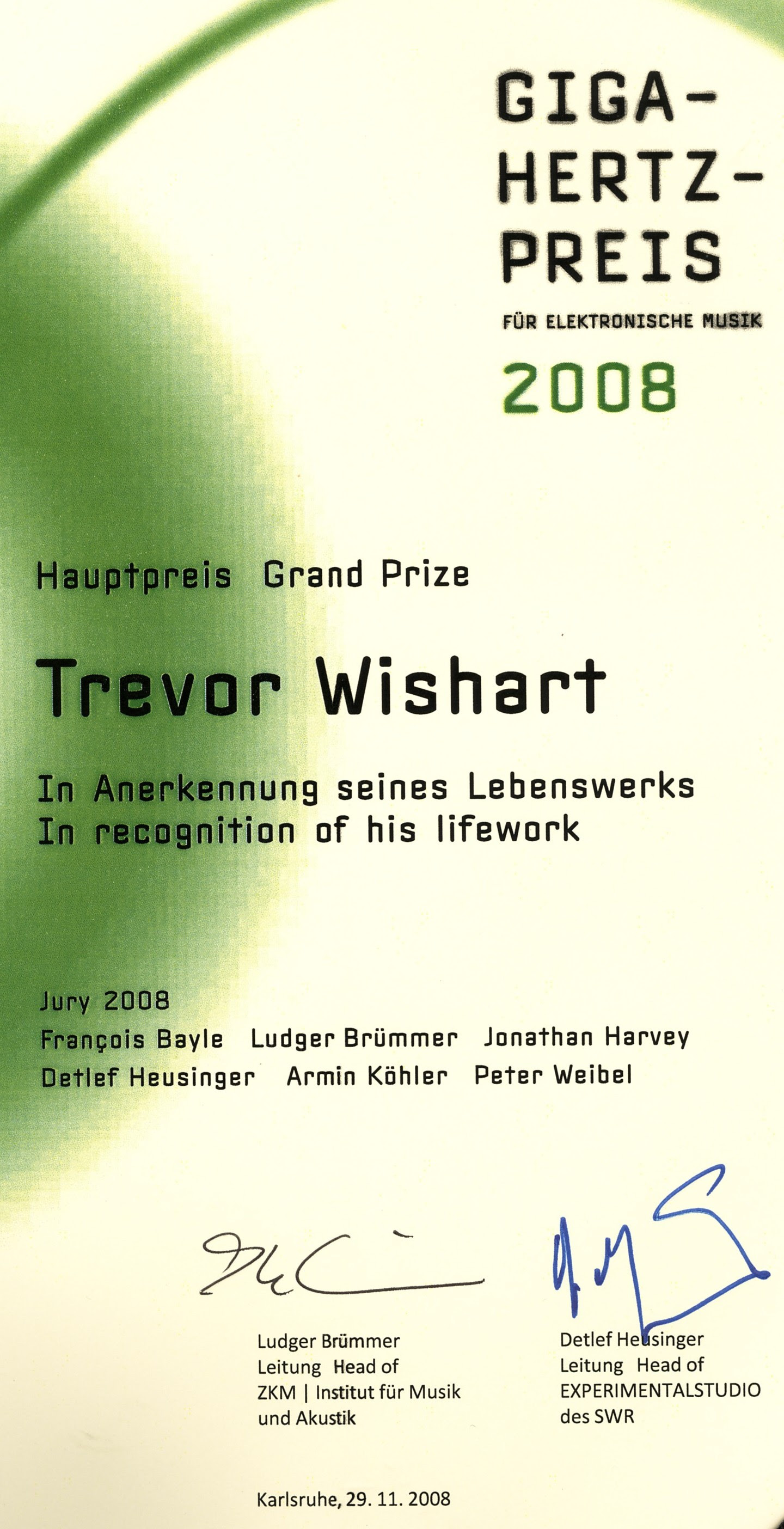 U.S.O. Project had the pleasure of interviewing Trevor Wishart, whom work has been recently awarded at the 'Giga-Hertz-Award for electronic music 2008'. The 'Grand Prize' honored his artistic and technical achievements along his career.
Trevor Wishart, born 1946 in Leeds, is a composer and performer who developed (not only) sound transformation tools in his Sound Loom - Composers’ Desktop Project software package. He's the author of the worldwide-known books 'On Sonic Art' and 'Audible Design', where he shares his extensive research on extended human voice and computer music techniques for sound morphing. He is currently 'Arts Council Composer Fellow' in the Department of Music at Durham University, England.

USO: You've been awarded at the Bourges Festival, at Ars Electronica and now at Giga-Hertz, three prestigious prizes for electronic music. How are your feelings now for all these tributes about your life work as composer?

TW: It’s very gratifying to receive this kind of recognition from the musical community, especially as the type of music I make is almost invisible in the cultural press in the UK, where electro-acoustic composition is squeezed out between classical instrumental music and popular music.

USO: How did you begin being interested in music composition?
TW: I was brought up in a working class household, with no real connection with the world of concerts, or theatres, but there was a piano in the house, a family heirloom, which no-one ever played. I became fascinated by it, and so my parents agreed to let me have piano lessons. A little later, when I was 7, I was looking in the window of the only classical music shop in town when I noticed a strange book, a musical score with no notes on it (it was a manuscript book). I immediately bought one and began to write my own music.

USO: Why did you choose the electronic medium and how has this affected your way of composing?

TW: I went to university to study Chemistry (my parents could not imagine music as a real job … my school advised me against pursuing this ‘dilettantism’) but soon changed to music. After being thrown into the deep end of Darmstadt by my college tutor at Oxford, I was writing complex instrumental music (7 tone rows with different intervallic structures + random number tables) when my father died. He worked in a factory in Leeds, and I suddenly felt my sense of disconnectedness from his world. So I bought the only tape-recorder I could afford (it ran at 3+3/4 inches per second and had a built in poor-quality mike) and went around factories and power-stations in Nottingham and Leeds, recording the sounds of industrial machinery, with some vague notion of making a piece for him. In the studio I discovered that many of my presumptions about composition were challenged in this new medium. Sounds had a life of their own which had to be respected. Preconceived absolute notions of musical proportions and musical relationships were challenged by the concrete reality of the sounds themselves. After two large early projects (‘Machine’ and ‘Journey-into-Space’) I settled on a way of working with complex materials based on the idea of sound-transformation, in the work ‘Red Bird’.

‘Red Bird’ treats its real-world sounds (birds, animals, voices, machines) as metaphors in a mythical landscape, one sound type transforming into another to create a form somewhere between music and mythic narrative. In fact the approach was suggested by reading Lévi Strauss’s ‘The Raw and the Cooked’, where he uses music as a kind of metaphor for his structural anthropological approach to myth. My idea was to turn this on its head and create a contemporary myth (about industrialism, determinism, ‘freedom’ and creativity) using sound and musical structure. The sound-transformation approach (very difficult to achieve in the analogue studio) was thus partly inspired by a political idea … the possibility of changing the social world.

With the advent of computers, very precise control of sound structure made it possible to adopt sound-transformation as a general approach to musical materials. I think of this as a generalization of the classical ideas of variation and development, extended into the entire spectral domain.


USO: You prefer using samples generated from vocal sources performed by you with extended techniques. Could you describe the creation process?

TW: Not strictly. I very often use the human voice (sometimes my own, sometimes live performers like ‘Electric Phoenix’ or ‘Singcircle’, sometimes voices from the media, or from the local community), for two reasons. On the one hand the voice is much more than a musical instrument. Through speech it connects us to the social world, and thence to the traditions of poetry , drama, comedy, etc. It reveals much about the speaker, from gender, age and health to attitude, mood and intention, and it also connects us with our Primate relatives. The listener recognizes a voice even when it is minimally indicated, or vastly transformed, just as we recognize faces from very few cues. And the average listener will be affected by e.g. a vocal multiphonic, an immediate empathic or guttural link, in a way which they will not be affected by a clarinet multiphonic (appreciate more in the sphere of contemporary music afficionados).

At the same time, apart from the computer itself, the voice is the richest sound-producing ‘instrument’ that we have, generating a vast variety of sounds from the stably pitched, to the entirely noisy, to complex rapidly-changing multiphonics or textures of grit and so on. This is a rich seam to mine for musical exploration.

My musical creation process depends on the particular work. Normally I have a general idea (a ‘poetic’) for the work. For example, ‘Imago’ has the idea of surprising events arising from unlikely origins (just like the imago stage of insect metamorphosis, the butterfly, emerges from the unprepossessing pupa). For ‘Globalalia’ the idea is to express the connectedness of human beings by exploring the fundamental elements of all languages, the syllables. I also have some general notions of how musical forms work … clearly stating the principal materials is important for the listener in a context where a traditional musical language is not being used; establishing key moments or climaxes in the work; repetition and development, and recapitulation of materials, especially leading towards and away from these foci, and so on. Repetition and (possibly transformed) recapitulation are especially important to the listener to chart a path through an extended musical form.

But all sound materials are different, and it is not possible to predict, except in the most obvious ways, what will arise when one begins to transform the sounds. So I spend a lot of time, exploring, playing with, the sources, transforming them, and transforming the transformations, and gradually a formal scheme appropriate to what I discover, and to those particulars materials, crystallizes in the studio.


USO: How was your experience working at IRCAM for "Vox 5"?

TW: My first visit to IRCAM was the most exciting learning experience of my life. Discovering the possibilities opened up by the analysis and transformation of sounds using software, learning about psycho-acoustics in Steve McAdams inspiring lectures, and mingling with high-powered researchers bursting with new ideas. As you probably know, I was offered the opportunity to make a piece during my 1981 visit, but then the entire hardware base of IRCAM changed and it was not until 1986 that I could actually begin work on ‘VOX-5’, a piece growing out of the experience of ‘Red Bird’. I was assigned a mentor (Thierry Lancino), but he soon realized that I could probably manage on my own (my science background at school meant that programming came naturally to me), and I soon discovered the Phase Vocoder, taking apart the data files to discover what was in them, and using this knowledge to begin designing sound-morphing tools based on the transformation of that data.
[1 | 2 | 3 | Next]
published by Matteo Milani at 1/26/2009