An interview with Natasha Barrett, pt.1

U.S.O. Project had reached composer Natasha Barrett to talk about her winning acousmatic piece 'Kongsberg Silver Mines' at the 'Giga-Hertz-Award for electronic music 2008' and more.
Natasha Barrett (1972) works fore-mostly with composition and creative uses of sound. Her output spans concert composition through to sound-art, large sound-architectural installations, collaboration with experimental designers and scientists, acousmatic performance interpretation and more recently live electroacoustic improvisation. Whether writing for live performers or electroacoustic forces, the focus of this work stems from an acousmatic approach to sound, the aural images it can evoke and an interest in techniques that reveal detail the ear will normally miss. The spatio-musical potential of acousmatic sound features strongly in her work. Barrett studied in England with Jonty Harrison and Denis Smalley for masters and doctoral degrees in composition. Both degrees were funded by the humanities section of the British Academy. Since 1999 Norway has been her compositional and research base for an international platform. 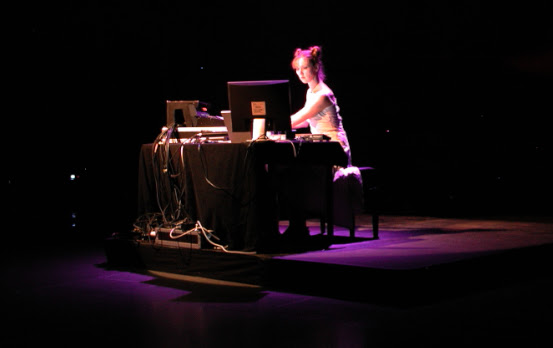 USO: Can you reveal us the history of your winning acousmatic piece 'Kongsberg Silver Mines' at the GIGA-HERTZ-AWARD (field recording, processing and composing)?
NB: It was in fact the work ‘Sub Terra’ that won the prize. For the award-concert they needed a sorter composition due to the already rather lengthy programme. ‘Kongsberg Silver Mines’ was originally one of three sound-art installations used as a prelude to ‘Sub Terra’. The other two installations are ‘Under the Sea Floor (Coring and Strata)’ and ‘Sand Island’. Each of these three installations zoom in on sounds unique to three locations under Norwegian ground, creating surreal semi-narrative journeys. In the full ‘Sub Terra’ cycle the installation sites lead the visitor through underground or enclosed sound-worlds, gradually closer to the concert space. The concert work Sub Terra then crystallises into a musical form that which is most abstract from the installations. The version of ‘Kongsberg Silver Mines’ played at the award-concert was a special concert remix of the installation. This version was designed to play over the ZKM ‘Klangdom’ – a dome of 43 loudspeakers. The remix intends to create as a self-contained work, to be listened to from beginning to end, rather than with open-time characteristic of the installation.
Sub Terra was commissioned by Ny Musikk Rogaland, which is an organisation working with contemporary music and art in the southwest of Norway. Long before the title and idea were set, the plan was to explore interesting features of sound-worlds hidden from everyday experience. For concerts and other events Nymusikk Rogaland often use an old brewery, which was partly converted into an arts venue. In the basement of this building you find enormous storage cellars, and it was for this space the installations were initially intended (although in the end the installations were spread out over the Norwegian town Stavanger). The pitch-blackness and crazy acoustics in the cellars started the ‘underground’ chain of thought and eventually pointed to the type of field recordings that I would make.
The sounds for ‘Kongsberg Silver Mines’ are recorded during a journey into ‘Kongsberg Silver Mines’ – an enormous mine complex dating from the 1700’s, extending over 1km downwards and several km into a mountain. For access to the mines I tagged onto a group of geologists who were visiting for a research conference. I made a recording of the 2 km journey on the original old miner's train, which was used to transport silver ore and miners in and out of the mines. The deafening sound and immense vibrations of the old trucks were amazing. It was necessary to wear earplugs and so I had to guess on the recording by looking at level meters and hedging my bets on the how the microphones were responding. Inside the mines we were met by a Norwegian guide. In shaky English he explained the local history and demonstrated some of original lift machines still in operation. I recorded almost everything and soaked-up the complete atmosphere so that later I could try to re-inject the total experience into the composed work. 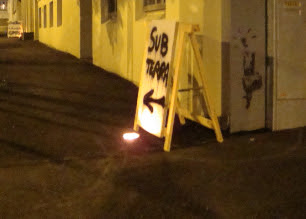 In ‘Under the sea floor (Coring and Strata)’ I was looking for sounds literally under the sea floor. At this time the University of Oslo was undertaking a research project where a 10-meter long core-sample would be taken from a “pockmark” in the Oslo Fjord, 32 meters below sea level. I slipped onto this trip via a friend and was not completely sure of what to expect apart from that I had to be careful not to get in the way! So for two days I hovered in the background on a cold, wet drilling vessel, recording sounds from on deck, below water and on the sea floor (and luckily bought hydrophones with 40 meter long cables!).
In ‘Under the sea floor (Coring and Strata)’ there are also two more sets of sounds. The first originates not from field recordings but from a seismic shot created by a large TNT blast recorded by an array of 2000 geophones spread over tens of kilometers. The sound on each geophone is about 15 seconds long and records the response from the Earth's crust and well into the mantle. The impulse and responses are very low frequency - well below 50 Hz. I obtained the geophone recordings as a seismic data set. After various tests I found that by using data from every 100th geophone the geological information was preserved while reducing the data set into a workable size. Each of these 20 data streams was converted into audible sound at the original sampling frequency of just 125 Hz. After pitch-shifting the sound was finally in a useful audible range. Using the seismic data as control data created the next set of sounds. The data mainly controlled frequency and volume modulation of sine tones. By selecting a suitable time step (speed) and modulation width (pitch variation), the simultaneous playback of the 20 data streams sonifies the seismic response. Audible interferences and correlations were also used as points of departure for compositional development.
For recordings in the third installation ‘Sand Island’ I simply buried two hydrophones under the sand in the tidal zone of a small bay on Søndre Sandøy in Hvaler, Norway. After 4 hours the tide lifts the hydrophones out of the sand and carries them into a floating bed of seaweed.

When it comes to processing it’s easier to talk about the ‘why’ rather than the ‘how’ as I use any technique and software that is appropriate. Whether it’s techniques originating in traditional ‘tape methods’ such as editing, mixing and montage or the latest spectral manipulation software, for me the point is to explore that which I find most interesting and important to the composition. This process normally begins by exploring on the one hand a sound’s spectrum, temporal and spatial shapes (the intrinsic content), and on the other hand the way the sound directly and abstractly connects to our experiences (the extrinsic content). Composition then involves making sense of the discovered information, further transformations to reinforce emerging connections, exploring counterpoints and motions and so forth. Specifically in the installations it was important to maintain compositional narrative journeys and a tight connection to my own original experiences during the field recording. 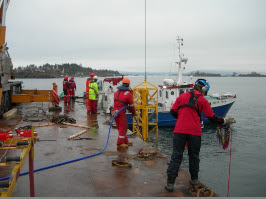 USO: How did you decide which sounds to use for this particular work called 'Sub Terra'?
NB: The installations were not originally intended for concert performance, even though now there exist concert remixes. Each installation is intended to be open for a listener entering and leaving as they wish, while the concert work ‘Sub Terra’ requires the listener to be attentive to the complete 16-minute work – an approach with involved somewhat different approaches to sound and structure. I wanted to tie narrative and recognisable sounds to the installations while the concert work would be more abstract and ‘intrinsic’. Here we have a paradox which I hope creates some degree of tension in the listening process: the installations are semi-narrative yet non-linear enough to allow a listener stay as long as they wish, while the concert work is more abstract, yet contains a level of detail and structural connections that require a continuous and concentrated listening process. For Sub Terra I created a new network from the more abstract installation materials. You may also hear materials clearly referencing the installations, but their development is somewhat different.
[ 1 | 2 | 3| Next ]
published by Matteo Milani at 1/28/2009