An interview with Michel Chion

When did you join the GRM yourself?
In 1971, not as a student but as a member. My first job was to be Schaeffer's assistant for his classes at the Conservatoire. It was a very original class which didn't only focus on electroacoustic music, but all forms of music. I prepared his lessons, taught some of the classes, and set assignments for the students, which Schaeffer graded. Composition assignments, exercises in montage. The course was about music in general, including non-Western musics and music therapy, and I thought it was quite original. Schaeffer wanted it that way. He wanted students to ask questions on the music's background, its social origins and function. In class it was more a question of participating and debating. So I was his assistant for a year, and then someone else took over.

What led you to join the GRM in the first place?

I'd already read Schaeffer's Traité des Objets Musicaux, and found it more honest, direct and relevant than certain books by Boulez, which I thought avoided a lot of questions relating to perception. But Schaeffer's book was 700 pages long, so to make it more widely known I wrote a kind of abridged version called Guide des Objets Sonores. That's why I joined the GRM. Schaeffer's book still hasn't been translated into English, by the way, but mine has. 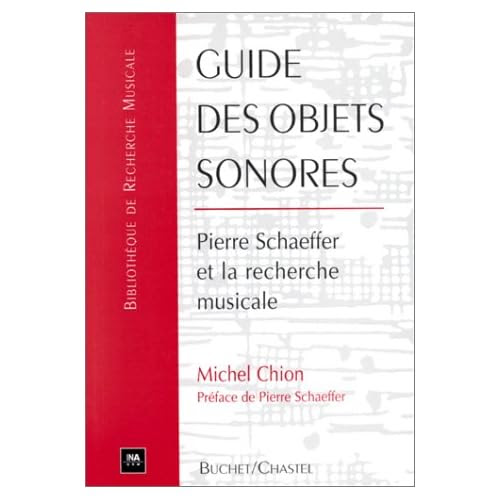 You referred to "electroacoustic music" a minute ago. What name do you prefer for this music?

Well, as you know, the terminology has changed. At the beginning of the 70s "electroacoustic" meant something on magnetic tape. But live electronic music already existed, and more and more composers started adding live instruments. Then you had people like Jean-Michel Jarre saying he was making electroacoustic music too, and people started thinking electroacoustic music had to be live. Anyone doing it on tape was kind of retarded. That was the ideology at IRCAM in the mid 70s, saying people who made music on magnetic tape (or later on a computer) were somehow lagging behind, or didn't understand that it could be done live. Well, I've always been of the opinion that there are things you can't do live, or rather, things you can do better on tape. It's like someone who doesn't understand that cinema is the art of fixing things, and tries to make a live film, with actors acting live in front of people and being filmed at the same time. Obviously that's absurd. In the same way I think there are many pieces of live electronic music that don't make sense. So after the mid 1970s, the terminology changed, and François Bayle came up with the idea that we should find a term specifically to describe music on tape. The problem for me was that he found a word – "acousmatic" – which was understood by only a handful of people in France and by nobody else in the world. When I mentioned acousmatic music outside France, nobody had a clue what I was talking about. They couldn't find the word in the dictionary. It didn't exist. You still can't find it in any French dictionary today. In the 1980s I suggested we return to the term "musique concrète", because it's known throughout the world. It's in all the dictionaries. Musique concrète, the art of fixed sounds – I wrote a book on the subject. I thought it was important that members of the public should understand what a work of musique concrète consisted of. So, yes, I still call it musique concrète, and that applies to François Bayle as well as Karlheinz Stockhausen.

When did you begin writing about cinema yourself?

That started in about 1980, when I was 33. Pierre Schaeffer told me about an offer he'd had to lecture on sound in cinema at a film school, which at the time was called IDHEC, Institut de Hautes Etudes Cinématographiques (now called FEMIS). He declined, but told them Michel Chion could do it! I'd already written an article on the relationship between sound and image, so I agreed. It was right about that time that something very important happened, with the arrival of videotape. Prior to that, if you wanted to study a film it was difficult, because you had to borrow a copy of a print and sit in a cutting room for three days taking notes. But by 1980 video recorders had appeared, and you could record a film from the television. Which I did. The first thing I analysed was a film by Bresson I recorded from the television.

Un condamné à mort s'est échappé, which is magnificent, and very good for showing off-screen sound. It's the story of a man in prison, and we hear the sounds as he hears the sounds. It's a real lesson in off-screen sound, and a very beautiful film.
So with a VCR you can stop the image, analyse the sound, listen to it alone or watch the image without it. Until then, few people had studied film like that. When I started, it was an area in which there were few books published, and most of those were by people coming from a technical or literary background. I'm one of only a few writers in France who came from a musical background, and I think you have to understand music to be able to talk about the use of sound in cinema. So I started writing articles and ended up at the Cahiers du Cinéma. I suppose I'm best known as a writer. But it all started because of Pierre Schaeffer.
[read the full interview - via paristransatlantic.com]
published by Matteo Milani at 1/07/2009