In 2012, Tue H. Andersen and I pioneered the use of #AR with sound by developing one of the first iOS app to create augmented soundscapes: it was called Lis10er (pronounced Listener, now removed from the App Store and no longer supported). This groundbreaking experiment used the headset’s microphone to pick up and alter the sonic world around you, warping and mixing it with pre-composed hypnotic electronic atmospheres - in real time.
The app is a mobile installation that places the emphasis on the surfaces of the world in which we live. It contains 10 themes: each one is a carefully composed “virtual place”, where the sonic environment is encapsulated and transformed to invent a new reality, mixing "Live" sounds and their relative aural context with designed ones. 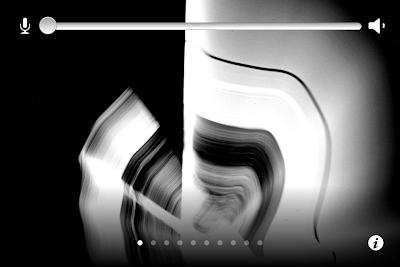 Step 1: To get started you only need the earphones or any other external headset with microphone.

Step 2: With the wet/dry slider you can blend the amount of the input source with the processed output.

Step 3: Swipe left and right to switch among 10 themes.