An Audio Journey into the Rainforests of Mamori


This Kickstarter Project is to assist in funding eight US sound artists to participate in this year's Mamori Sound Project and, by doing so, help this whole exceptional project in the Amazon survive. This project will only be funded if at least $25,500 is pledged by Tuesday May 31, 1:00am EDT.
Mamori Sound Project is an independent residency/workshop that has been carried out in the Brazilian Amazon since 2005 by a small non-profit organization, integrated by sound artist Francisco López and the cultural association Mamori ArtLab, based in Spain and Brazil. Mamori Sound Project supports the local community at Mamori Lake (Amazonas state, Brazil) by providing jobs every year for a significant number of people in this community.
The Mamori Sound Project is a 2-week workshop/residency for professional and semi-professional sound artists and composers with previous experience in the area of sound experimentation and field recordings. It takes place at Mamori Lake, in the middle of the Brazilian Amazon, and involves theoretical/discussion presentations, field work and studio work. The workshop/residency has a special focus on creative approaches to the work with field recordings, through an extensive exploration of natural sound environments. It does not have a technical character but is instead conceived and directed towards the development and realization of a collective project of sonic creation with the interaction of all participant artists/composers. The activities of the workshop/residency include: Introductory theoretical/discussion presentation sessions on field recordings and sound creation, with a historical/philosophical perspective.
All these activities are organized in a daily schedule according to the changing sonic environments of the rainforest. This typically involves many hours of field and studio work but there is also flexibility to allow participants to choose from several schedule options and to have the opportunity to carry out other activities related to the daily life in this environment, such as fishing for food or interacting with the local community.
[project home: kickstarter.com]
[franciscolopez.net/amazon.html]
published by Matteo Milani at 3/24/2011 No comments: 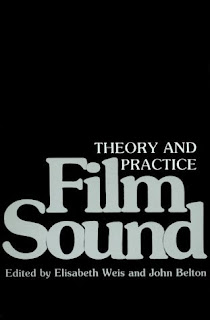 [an excerpt from "Film Sound: Theory and Practice

"]
I think it's generally misleading  to say, "Well, that sequence had eighty tracks, it must be great." Ideally, for me,  the perfect sound film has zero tracks. You try to get the audience to a point, somehow, where they can imagine the sound. They hear the sound in their minds, and it really isn't on the track at all. That's the ideal sound, the one that exists totally in the mind, because it's the most intimate. It deals with each person's experience, and it's obviously of the highest fidelity imaginable, because it's not being translated through any kind of medium.

So, at a certain point, there were 160 tracks for Apocalypse. That is an awful lot, but on the other hand, if somehow I could have achieved the same effect with no tracks, I would have been more impressed.  Or one track. If there had been one sound that did all of that, so mysteriously, I would be more impressed. but what that means is: thinking very, very deeply, and being very, very lucky in getting exactly the right thing. And if you can do that, then the number of tracks is meaningless. But, generally speaking, it doesn't happen very often, if ever, to get that one thing. That's just an abstract ideal that I always strive for.

I believe that there have always been sound films, since the invention of films, and there will always be silent films. You can look at television show today, or even some features, and there really is no "sound" in them. There is talking, and there's music, maybe, but the part of the brain that is interested in sound and texture and the meaning of sound as music is totally uninvolved. The sound in those films is conveying little pellets of information - the door closed, the person said this - and there's no duality, no stretching. So there are silent films today: they've got sound tracks, of course, but emotionally, they're silent.

Whereas you can look at Chaplin's silent comedies and certain other films and they depend tremendously on the sound: the sound that the wardrobe made when it fell on him. You can "hear" all of the dishes break. Those films are using sound. They're asking you to imagine the sound of things. So they are sound films, even though they are completely silent. You try to track yourself along the boundaries between those two things - that's where you swing between zero tracks and 160 tracks.
- Walter Murch
published by Matteo Milani at 3/15/2011 No comments:

Listening Points - Punti di Ascolto
This panel discussion will present a selection of sound professionals with different paths and specializations.
The exchange of experiences, procedures and areas of action, will draw lines and perspectives on possible developments of the work on sound.
From sonic branding to custom software coding, through the most advanced and immersive forms of sound and music creation, these "listening points" are starting points to think and talk together about the craft of sound design nowadays, in relation to different media and the current technological/cultural communication system.
Guests:
Massimiliano Viel - composer and live media artist (Otolab / Sincronie)
Matteo Milani - sound designer and sound artist (Unidentified Sound Object / Green Movie)
Stefano Fontana - music producer, DJ and sound designer (Sound Identity)
Guido Smider - software developer and multimedia artist (Noiseplug / Smidernoise)