An interview with Otto Laske

by Federico Placidi and Matteo Milani - U.S.O. Project, May 2011


Otto Laske is a composer internationally known for his work in computer-assisted score and sound composition. In the 1980’s, he co-founded and co-directed the New England Computer Arts Association, NEWCOMP, together with Curtis Roads (1981-1991). In 1999, his 25-year long work as a cognitive musicologist was introduced to, and explained to, a larger public in Jerry Tabor’s 1999 Otto Laske: Navigating New Musical Horizons (Contributions to the Study of Music and Dance). The book contains a comprehensive bibliography of Otto’s compositions, poems, and musicological writings.
Otto Laske has always been seen as an innovator, both in theory and composition. After a career in music, he became a knowledge engineer in the 1980s and a psychologist in the 1990s. Since 1999, in addition to his compositional work, he has practiced as a developmental coach and management consultant based on a methodology created by him, called the Constructive Developmental Framework (www.interdevelopmentals.org). This methodology for assessing individual’s developmental potential shares certain global structures with Laske’s cognitive musicology of the 1970s and 1980s, in that it is multi-dimensional, dialectic, and based on empirical research. 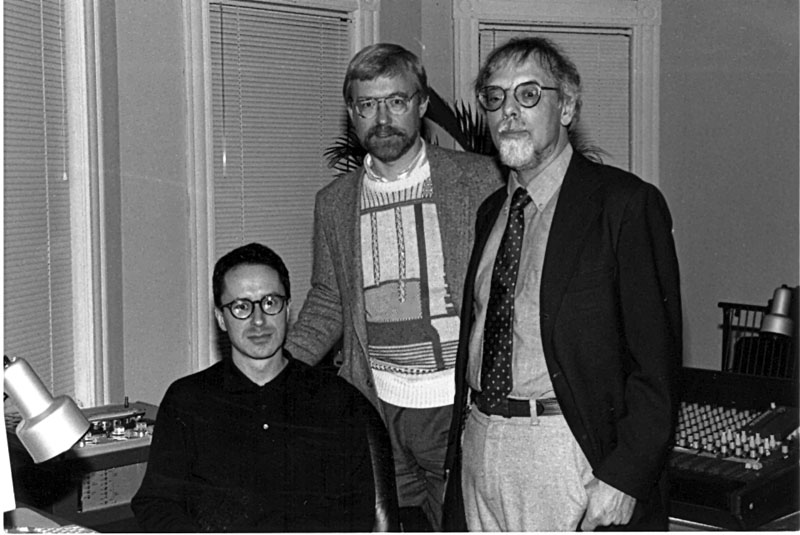 [Barry Truax with Curtis Roads and Otto Laske, Cambridge, MA, 1989 - courtesy Barry Truax]
" [...] a theory of music has to understand not musical results but rather the mental processes that lead to such results." - Otto Laske
"Looking back at 43 years of making electronic music, it's clear to me that ever since I began composing in 1964, the development of music technology strongly shaped my compositional ideas. The artistic task seemed to be to show that new technologies can indeed produce "art." At the same time, these technologies brought forth new compositional ideas not elaborated before. In short, a stark interdependency of compositional thinking and technological possibilities prevailed. When listening to my various compositional adventures today there is, for me, a certainty aesthetic unity that binds all of my pieces together. It will be up to historians (once they have become knowledgeable about the technology underlying these pieces) to judge them from a more balanced perspective than is perhaps possible today." - Otto Laske, January 2010
Computer Software Based Composition 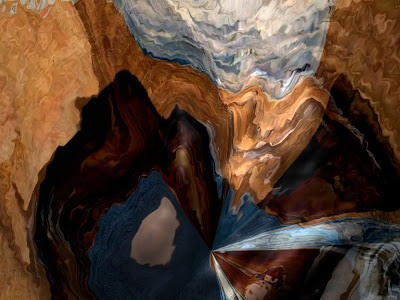 [Lanesville seen by camera - Otto Laske]
My artistic life is far from over. I have often been told that my music is very visual and contains many visual cues. Therefore, in 2009 I began to think: composition is composition, why don’t I extend my compositional work into the visual domain. (I also have written a substantial body of poetry, both in German (1955-1968) and in English (1967-1995)), still unpublished.
In 2008, after having begun work in watercolour and oil, I discovered what today is called visual music through Dennis Miller, a fellow composer living near me, and one of the pioneers of the new medium. (I always meet the right people at the right time, it seems.) Visual Music is a discipline still in its infancy, but has its roots in the 1920's and 1930's, when artists like Oskar Fischinger, Germany, began to experiment with abstract films that were called “absolute film” since they were without narrative and storyline, and rather simply focused on (often geometrical) shapes and colors. The pioneers of visual music had the vision that it was possible, or should be possible, to bring abstract painting in the sense of Kandinsky and Klee to film or video, and link it to music (instrumental music at first, and later electronic music).
In my present work with Studio Artist and Cinema 4D -- the first a program for digital painting and the second for animation -- I have again taken up the practice of using two different programs not initially meant to work with one another. But at least they can “talk” to each other now, which was not the case with early music programs. And so I am gradually learning to go back and forth between these 2 programs, not to mention that I also need to use a sound processor such as Sound Forge, a movie making program such as Vegas Movie Studio, and bring them all together to produce a visual music video.
For the time being, I have produced a gallery of images that will be accessible on www.ottolaske.com in the near future. Even for an experienced composer like myself, learning and using visual programs presents a steep learning curve. I am therefore putting my poetry and music on hold in order to became a digital painter and animator. I have given myself two or three years to learn these programs before I can turn out anything that would satisfy my artistic standards.
Again, the computer is the "leading voice" that challenges me as an artist to bring together music and image after a lifetime of composition. I feel very fortunate to be able to do this at my age (75), additional years permitting.
[works by Otto Laske @ silenteditions.com]
[www.cdemusic.org]
published by Matteo Milani at 5/01/2011