In celebration of its 25th anniversary, director Ridley Scott has gone back into post production to create the long-awaited definitive new version, which Warner Home Video will unveil on DVD December 18th in the U.S.
Blade Runner: The Final Cut, spectacularly restored and remastered from original elements and scanned at 4K resolution, will contain never-before-seen added/extended scenes, added lines, new and improved special effects, director and filmmaker commentary, an all-new 5.1 Dolby® Digital audio track and more.

published by Synesthesia Recordings at 7/30/2007 No comments:

[via samstuffs]
published by Synesthesia Recordings at 7/30/2007 No comments:

Email ThisBlogThis!Share to TwitterShare to FacebookShare to Pinterest
Label: Entertainment, Filmmaking, Off topic

Andrew Stanton: "One thing I knew in the beginning is I didn’t want to have dialogue in the traditional sense. In order to stay true to the integrity of the inanimate object, I really wanted to view most of it’s personality through how it was constructed. And it’s a metal box, a piece of electronics. I’m basically making R2-D2 the movie."

Stanton introduced "Star Wars" veteran Ben Burtt, who is doing sound design on the film. He played samples of the various robots sound effects then showed animation samples of the robots.
He wasn't sure if he'd be working on Indiana Jones 4 since the WALL•E schedule was going to overlap with its schedule. WALL•E is his first priority.

Ben Burtt: "I would love to be involved. Its kinda a tradition but Wall E and Indiana Jones have the same schedule so I don't know. My priority is Wall E." Stanton, however, gave Burtt an out, saying "I think we can find a way to work that out. Nobody is denying Indiana Jones."

It's not often Ben Burtt gives a live demo of his sound design, and I was enraptured as he used a small keyboard to show off some of his extensive work for the (mostly) dialogue-free Wall-E. 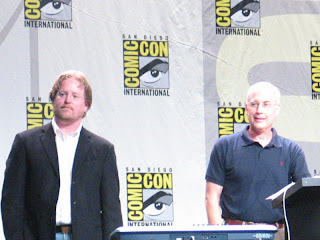 published by Synesthesia Recordings at 7/24/2007 No comments:

Natasha Barrett recording in the sandpit

Natasha Barrett is a freelance composer, researcher and performer of acousmatic and live electroacoustic music. She works with diverse approaches ranging from installation to concert works, interactive art and multi-media collaborations as well as composing for instrumental forces. All energy stems from her acousmatic approach to sound, focusing on the ear and the different listening strategies we use when finding meaning away from visual stimuli. Since 1995 the spatio-musical potential of sound has been a focus of her output and research.

[from jorgenlarssson]
[Sleppet - The Sound of Norwegian Spring]
published by Synesthesia Recordings at 7/24/2007 No comments:

A guide to making a living making music out of your backpack, from anywhere, and everywhere.
by Michael W. Dean and Chris Caulder

[via MG Blog]
[download the pdf - diynow.org]
published by Synesthesia Recordings at 7/20/2007 No comments:

[indianajones.com]
published by Synesthesia Recordings at 7/19/2007 No comments:

Email ThisBlogThis!Share to TwitterShare to FacebookShare to Pinterest
Label: Events, Filmmaking, Off topic

...the director wheeled an automobile into the studio and had his actors talk right in it. For a pool-room scene in a small western town, he laid wooden planks on the studio floor, built walls of paneling to give the effect of talking in a room, and set up a pool table where sound-effects men, doubling for actors, played pool with real cues and balls...


[via Modern Mechanix]
[Radio Drama Techniques]
published by Synesthesia Recordings at 7/19/2007 No comments:

Nintendo announced Wii Fit, a fitness game for the Nintendo Wii.
Surprisingly, Wii Fit centres on not Wiimote, but an entirely new controller, the Wii Balance Board (name not final). The WBB is a flat surface you lay on the floor that wirelessly connects to the Wii, just like the Wiimote.
Coming in the first half of 2008.
published by Synesthesia Recordings at 7/15/2007 No comments:

The loudest noise heard on earth

Krakatoa is a volcanic island in the Sunda Strait between Java and Sumatra in Indonesia. It has erupted repeatedly, massively and with disastrous consequences throughout recorded history. The best known eruption culminated in a series of massive explosions on August 26-27, 1883.
The 1883 eruption generated the loudest sound historically reported: the cataclysmic explosion was distinctly heard as far away as Perth in Australia (approx. 1930 miles or 3100 km), and the island of Rodrigues near Mauritius (approx. 3000 miles or 4800 km).
On no other occasion have sounds been perceived at such great distances (over 1/13th of the earth's surface).

It is difficult for the human being to imagine an apocalyptic noise as it is for him to imagine a definitive silence. Both experiences exist in theory only for the living since the set limits to life itself, though they may become unconscious goals toward which the aspirations of different societies are drawn.
[The Soundscape

[What happened in the Krakatoa eruption in the 1800's? - via Volcano World]
[Discovery Channel: Explore the 1883 eruption]
[geology.sdsu.edu]
published by Synesthesia Recordings at 7/15/2007 No comments:

Making of the "Doctor Who" theme

Footage of the early 80's remake of the Doctor Who theme song.
A behind-the-scenes view of how it was made and close glimpse at the equipment used (this is a portion of the Music Arcade - Radiophonic Workshop special).

published by Synesthesia Recordings at 7/14/2007 No comments:

With vehicles, the sound you hear is really shaped by the sound tool. The engines are made up of multiple elements, usually 2 main engine loops (low and hi), a load loop (for when they’re going up an incline), a rumble loop, idle loop, track loop, suspension rattles (usually two kinds, hi and lo) gear shifts and turrets etc. These sounds change dynamically based on various game variables, such as the velocity of the vehicle, the RPM value, the gear the vehicle is in, the surface being traveled on etc. Various effects are mapped to each sound based on the values of these variables. So EQs change the engine to get brighter as it gets faster. The rumble, tracks and surface loops all come up in volume as speed increases. When the vehicle start to go up a hill, we’ll pitch all the engine sounds down and then bring up the volume of the load loop (whining engine sound) which makes it sound like the engines are stressing out.

[play video - via indianajones.com]
[first day of shooting]
published by Synesthesia Recordings at 7/12/2007 No comments:

The Making of Star Wars:

The Definitive Story Behind the Original Film. 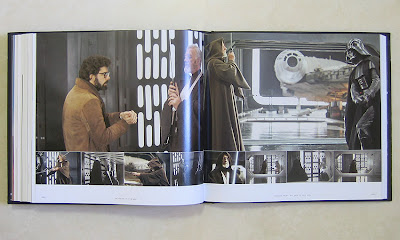 Mike's Lalaland has posted some pics of this book

.
Star Wars fans, you don't want to miss it!

published by Synesthesia Recordings at 7/10/2007 No comments: 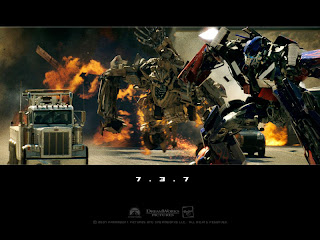 "It takes tens of thousands of different sounds to make a movie like Transformers. The process begins with supervising sound editors Mike Hopkins and Ethan Van der Ryn. They say they use their imagination to figure out what a robot will sound like. They imagine what each robotic move, footstep and explosion should sound like. Then they assemble a team to create them. They won Academy Awards for the sounds in The Lord of the Rings and King Kong, but squads of giant robots from outer space are a different story".

[read the full article - via cbsnews.com]
[More Transformers - via filmsounddaily]

published by Synesthesia Recordings at 7/10/2007 No comments:

Email ThisBlogThis!Share to TwitterShare to FacebookShare to Pinterest
Label: Filmmaking, Sound for Picture

"Ratatouille" Sound for Film Profile with Randy Thom from Michael Coleman on Vimeo.

[via mixonline.com]
published by Synesthesia Recordings at 7/04/2007 No comments:

A lightsaber game for Nintendo's Wii

Rumours of a Star Wars game that uses the Nintendo Wii controller as a lightsaber have been fuelled by comments made by Jim Ward, president of LucasArts and a senior vice president at Lucasfilm.
"We’re all over that, and internally we have already played a lightsaber game on the Wii. It’s a lot of fun, and we’ll get there."

[read more - via gamasutra.com]
[view Playing Kyma, first-ever Jedi performance with the Wiimote]
published by Synesthesia Recordings at 7/03/2007 No comments:

An Interview with Pixar’s Gary Rydstrom

[via upcomingpixar.blogspot.com]
published by Synesthesia Recordings at 7/02/2007 No comments:

On July 09-10, Federico Placidi is presenting an introduction to Kyma with particular emphasis on granular synthesis and live controls for students in the CCMIX summer course.

Composing the Interaction: From Continuous Envelopes to Control Signals as Spin Networks