Around the world: "Whispering Galleries"

Wallace Clement Sabine (1868 - 1919), was an american physicist, who founded the field of architectural acoustics, the science of controlling sound within buildings. Sabine was acoustical architect of Boston's Symphony Hall, widely considered one of the two or three best concert halls in the world for its acoustics.

What is a whispering gallery? It's a gallery beneath a dome or vault or enclosed in a circular or elliptical area in which whispers can be heard clearly in other parts of the building. 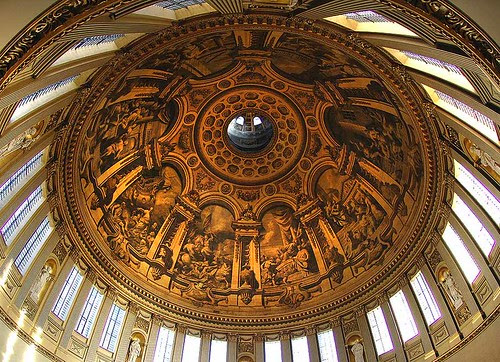 A whispering gallery is usually constructed in the form of an ellipsoid, with an accessible point at each focus. When a visitor stands at one focus and whispers, the line of sound emanating from this focus reflects directly to the dish/focus at the other end of the room, and to the other person. Circular whispering galleries may provide "communication" from any part on the circumference to the diametrically-opposite point on the circumference.

The most famous ones in Sabine's time included:

"Most, if not all, of these galleries are architectural accidents resulting from curved surfaces presumably designed for their visual impact. If you are the visitor, the sound of a distant speaker's voice is focused directly to you, as if the speaker were right next to you. The experience is unforgettable."