Between 1967 and 1969 Gottfried Michael Koenig devoted himself to compose electronic music, producing a series of works entitled Funktionen.
The instrument that inspired and made ​​possible these compositions was the Variable Function Generator, designed by Stan Tempelaars at the Institute of Sonology, Utrecht.
Koenig used the VFG not only to produce the basic sounds (waveforms), but employed it as a modulator and control instrument in order to dynamically manipulate the elaboration processes which were carried out on materials (ring modulation, volume curves, filtering and reverberation).
The idea behind the experiment was to entirely produce the sound material and its structural implementation using only the VFG (this led to the creation of Funktion Grün, Funktion Gelb, Funktion Orange, Funktion Rot).
For a detailed analysis of Gottfried Michael Koenig’s Funktionen, please see the document on his official website:
Analytical Descriptions (1971) [Download]
The works presented in U.S.O. Project’s Functions explicitly refer to a series of works that with an extraordinary vision Koenig realized in those years.
The main challenge was both philological and aesthetical. The idea was to create an automated composition by exploiting the computing power of modern computers and by a sufficiently widespread and flexible software in order to re-program the original algorithms.
The Patches used in the prototyping of the generative software environment were assembled using a specially written program that provided in text format - using serial procedures - how the various modules should be combined with each other - i.e.:
Mel / empty / reverb
Basis / ring+mod / Empty
Pulses / empty / reverb
Basis / mod / filter-reverb
Mel / ring / filter
Pulses / ring+mod / reverb
Basis / empty / filter
Mel / ring / filter-reverb
Pulses / mod / Empty
Basis / ring+mod / Empty
Mel / ring / filter-reverb
Pulses / mod / reverb
Mel / empty / filter


Once we had identified the blocks, they were displayed in the form of flow charts - i.e.: 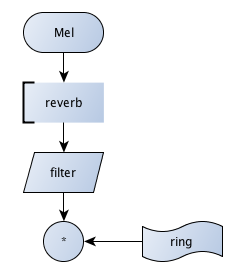 The various Patches were then implemented as Abstraction in Max/MSP: 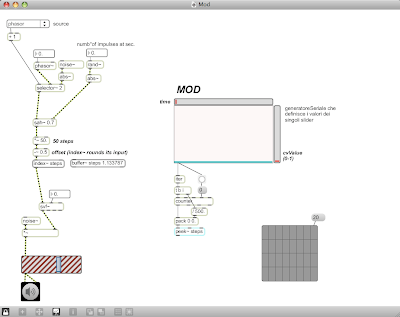 In order to manage all the modules in parallel, plus the sends to the reverberation units and so forth, we constructed a matrix, that automatically reconfigures itself according to strict procedures based on serial techniques:

The implemented automata procedures have in fact "created" the composition itself.
In the end, the multichannel final master was obtained with Kyma/Pacarana’s surround Objects.
As you can deduce from a listening

comparing the work of Koenig and U.S.O. Project, there are many differences, both in the aesthetic and formal domain.
It was clear to us since the beginning that we didn’t want to repeat Koenig’s compositional experiment in every detail, but to build - and then understand - something new produced using the same modus operandi that convinced him to make those works. At the same time we wanted to preserve an historical legacy with those works (something that is easily recognizable especially in the first piece). It was also interesting to us to empirically verify the effectiveness and efficiency of the procedures in terms of timbre and formal development using the serial approach.
The actual distributed version is rendered using U.S.O. Project’s custom binaural techniques for headphone listening only.
Beyond any reference to Koenig’s original works, Functions is a spontaneous self-reflection about the different states of sound matter and the exploitation of its possible configurations, shaped and imagined through a dialogical process between the machine and its operator.
Matteo Milani, Federico Placidi