Jenny Stein: What is a sound designer?

Richard Beggs: My idea of a sound designer is the soundtrack equivalent of the production designer (responsible for the look of the film, and the stylistic considerations that express the director's intention for how the world is perceived in their film). This look, this visual feeling, can carry a strong emotional or dramatic load. The sound designer works with the same material aurally. It can be as simple as hearing a clock. What kind of clock is it? Is the clock heard subjectively (in the character's mind) or in the room? Acoustical manipulations of the natural world can direct the audience subconsciously towards a particular feeling or point of view about the scene.
The sound designer is responsible for developing these ideas and working with the sound editorial crew. Because movie sound is complicated and there is so much to cut, a lot of people are involved. Even the most ordinary mundane sounds that you would say have no particular dramatic importance one -door slam- as opposed to another may help push the movie in the direction the sound designer would like it to go.
I'll read the script and right away I'm thinking about the various possibilities. What is the feeling I get? I like to develop various sound motifs that carry through the film. This creates a psychological glue that helps tie the film together emotionally and gives a bit more depth to the character's emotional reactions.

Sound motif: a sound effect or combination of sound effects that are associated with a particular character, setting, situation or idea through the film.   The sound motifs condition the audience emotionally for the intervention, arrival, or actions of a particular character. The sound motifs can be very useful in the rough cut, where they help clarify the narrative functions of the characters and provide a sound association for those characters as we move through the story.   The use of sound motifs can help shape a story that requires many characters and many locations and help unify the the film and sustain its narrative and thematic development.  [edited excerpt from The Technique of Film and Video Editing


JS: How are motifs used?

RB: Early on in the movie Sleepers (by Barry Levinson) there is a really terrible, emotionally disturbing event, during which specific sounds happen as a natural course of the action: somebody bumps the light bulb with a little metal chain rattling on the bulb and a steel cage door is opened and slammed. Throughout the movie in those moments when the characters who experienced this horrific incident either speak about it, or you can tell they are thinking about it, I would reintroduce the sound of the pull chain and the door, but in a very distant, diffuse, almost musical way.
It's like the sense of smell. You have an experience that is either pleasant or unpleasant and some odour or aroma associated with it. For the rest of your life, if the experience was strong enough, when you smell that smell, there's a good chance that you'll recall the initial experience. Sound can work much the same way. Especially when it's all jammed inside an hour-and-a-half in a dark room the audience won't forget that easily what they heard 20 minutes or an hour ago.


JS: How else do you use sound?

RB: I'm into backgrounds, the emotional qualities of background sound. The sound of air conditioning in a room can be passive and gentle "fill the space" or it can create an oppressive, unpleasant, pressurized feeling. It's not an issue of loudness or quietness, but what the sound is. In Spike Jonze's movie, Adaptation, a lot of scenes took place in Florida just outside and inside a house we decided had a really funky air conditioner. The neighbourhood was just droning with these air conditioners, but one in particular had this rattle that would come and go, rhythmically. I embedded that in the background and then the background began to function as what are called effects.
Very often, depending upon the movie and the style, sounds will be required to trascend the mundane, to take on special significance. And a specific sound - because it isn't normal - will leap out and become an event. In Children of Men (by Alfonso Cuarón) there's this protracted amazingly-shot battle sequence as our hero journeys through the combat zone and into a large institutional building: lots of rubble, broken windows, with concrete stairs that go up 6 or 7 stories. People are living there in primitive conditions, with chickens. In the middle of this really awful battle I twisted the sound around so that the battle sound suddenly receded - what's loud suddenly becomes very quiet and in the foreground you hear very specific small pin point sounds from the battle. It's a subjective point of view. You hear the loud "buck buck buck" of the chickens before you see them. As Clive Owen comes up around the stairs suddenly you see a couple of hens scurrying around "buck buck bucking" and the sound of them is inordinately loud and prominent. It is not a realistic impression of that scene, but it works dramatically - it affects you emotionally. 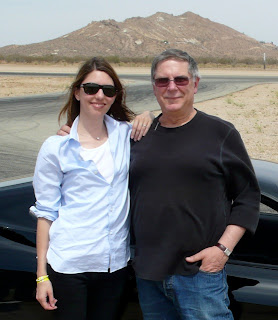 [Sofia Coppola and Richard Beggs on the set of "Somewhere" - photo © R.Beggs]


JS: Do you record specific sounds when you are working on a film?

RB: For Lost in Translation (by Sofia Coppola) went to Tokyo for 2 weeks and recorded all of the practical locations of the movie; - both night and day - specifics and backgrounds. Even if there were a library of sounds called Tokyo Sound Effects it wouldn't have had the focus that "having read the script and seen dailies of the picture" I had very specific ideas about what I wanted in the sound track.
For Marie Antoinette (by Sofia Coppola) I went to Versailles and spent time in the Palace of Versailles, at 11 p.m. at night after it was closed and really quiet. I recorded the creaking of the floors, the same floors that were there when Louis XVI was there, and recorded the clock in what was Louis XVI's bedroom, the actual clock that was there 200-plus years ago. I recorded doors and fountains, bells, the forest, the grounds of the Palace; we hired French hunting dogs and French hunting horns. It was all done to order.
I'm interested in and I enjoy the physicality of sound. If I have a specific requirement for a sound, I will reject sounds over and over and over again until I get the right one. I want the sound to capture the essence of that object.
Technology has given us the ability to make many, many layers - and in fact reality has many, many layers - but we don't really hear in many layers. The advantage of having, let's say, 12 things we can listen to in the scene (they've all been prepared and cut) is i can pick the 2 or 3 things that best convey the scene and either forget the rest or relegate it so far away that it's merely a colour.
I would rather have the one sound that says the most than 5 or 6 sounds - all combined - that try to convey that same idea. It's not the amount of stuff but the specific choices you make.