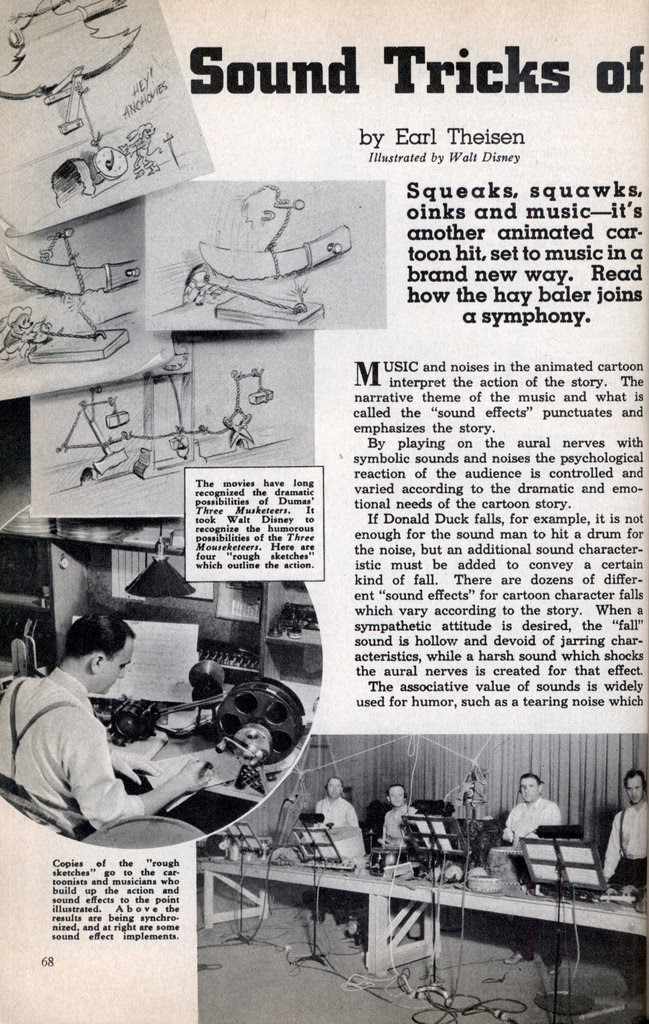 [via blog.modernmechanix.com]
Through study and experimentation Walt Disney and his engineers have found that by introducing music or various sounds and noise frequencies into the cartoon, the response of the audience is varied and controlled. By combining noises of certain pitches or tempos the psychological values of the cartoon music is emphasized in keeping with the story requirements.
[...]
Stories are told by sound. Vance DeBar "Pinto" Colvig, who wrote the lyrics for “The Three Little Pigs” and who does many of the sound “imitations” for automobiles, airplanes, or machines when they assume human characteristics, is able to convey a whole story by sound. For example, he caricatured a steam roller at work by suitable noises, pops, puffs, razzes, and wheezes. Vocally, without the aid of mechanical devices, he depicted a narrative episode of a very busy steam roller that worked hard, then got tired and stopped. To do this he made a picture on paper of the sound by working out the suitable suggestive sounds and inflections which he set down on music paper according to the desired effects, tonal range, and tempo which brought to life the pen and ink steam shovel. “Pinto” Colvig with the aid of a trombone and vocal sounds can make an airplane do all sorts of antics. Real airplane sounds cannot be controlled to musical tempo for cartoon effects. Each sound in a cartoon film is the result of much thought. Such things as bugs, all sizes, getting the hiccoughs which happened in “Mickey’s Garden” when Mickey sprayed them with “bug eliminator” required hours of rehearsal before the sound was recorded. For some sounds hours are required in rehearsal, and fifty or sixty hours are required to make the sound for the average cartoon.

While much of the sound is made vocally, mechanical devices and various materials are also used. One kind of slow-burning fire noise is made by crinkling cellophane, while a more crackling fire sound is gained by twisting a bundle of bamboo strips. A train getting under way is obtained by a tin can in which is a handful of gravel. By shaking the can and gravel up and down, the noise of a real railroad train is created. Another “train noise maker” consists of a number of wires held at one end by hand. The other end of the wires is rubbed over a sheet of corrugated tin. Thunder claps of various kinds are obtained by cowhides and sheets of metal, while wind noises are made by rapidly revolving a wheel with wire spokes. Another hollow ghostly wind noise is made by revolving a wooden drum against taut silk. Rain noises are made in a drum in which are stretched piano wires. Particles of glass dropping against the wire when the drum is revolved creates the sound.
[...]

Many devices are specially constructed in order that certain sound frequencies are dampened so the “imitator” has a better control over the pitch and volume of the noise. Special resonators in the pianos, doors set in elaborate resonating jams so “door-closing” noises may be made for cartoon purposes, and many other constructions are necessary.
Walt Disney, who knows the dramatic value of various sounds and musical tempos, has constructed many novel devices in order to produce the necessary sounds.
The background orchestral music is valuable in directing the emotional responses of the audience, and is used to elaborate on the cartoon story by what Walt Disney prefers to call the “earical illusion.”
[...]
Music and sound has become an exact science with Walt Disney. The music and sound effects in his cartoon psychologically tell the film story for the ears as the picture on the screen does for the eyes.
[read more: blog.modernmechanix.com]
[Time Machine - part I: Murray Spivak]
[Time Machine - part II: Mel Blanc]
[Time Machine - part III: Jimmy MacDonald]
published by Matteo Milani at 11/21/2010