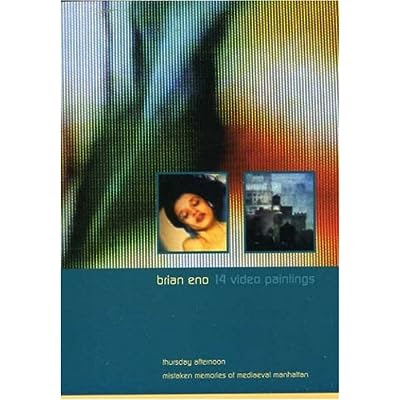 These video installations were produced by Brian Eno to be shown at various galleries around the world. Subsequently released on vhs and laserdisc, the two works are to the video format what his audio pieces were to music; ambient musings on the nature of the medium. They are non linear and have no obvious plotline or direction: 'video paintings' as the title suggests, drifting in and out of focus. The first piece on the disc is accompanied by Eno's seminal Thursday Afternoon, a beautiful single hour-long piano track, and the second piece entitled Mistaken Memories of Mediaevil Manhattan is set to tracks from 'Music for Airports' and 'On Land'. 'Thursday Afternoon' is probably the most accessible, with Eno using film footage taken of his close friend Christine Alicino and cutting it together intimately. It ends up playing a little like a nostalgic diary, a musing on the life or a person now departed. The second piece is less figurative, and features painterly shots of the New York skyline, clouds moving overhead and the colours drifting like a melting palette.
[watch video - via UbuWeb]
[direct download - mp4]

[thanks to babelrecords.blogspot.com]
published by Matteo Milani at 2/20/2009