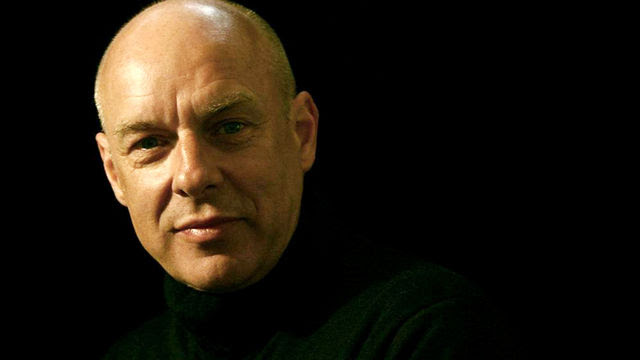 "Synthesisers interest me for two reasons. One is because they do introduce new sounds into the world, and the other is because in working with them, I learn a lot about how sounds made up. The DX7 has been very useful for that, I use it almost as much as a research tool for seeing how a sound is made. [...] My solution has been to make the equipment unreliable in various ways. I used to like to old synthesisers because they were like that. My first synthesisers - the EMS, the AKS and the early Minimoog - were all fairly unstable and they had a certain character. Character has really to do with deviations, not with regularity. And then, of course, I used to feed them through all sorts of devices that also had a lot of character: that were themselves in various ways unpredictable. The interaction of a lot of these things started to create sounds that had an organic, uneven sound to me."

Quotes from some of the conversations recorded for the BBC4 Arena documentary series, dedicated to the life and work of Brian Eno:

"One of the important things about the synthesiser was that it came without any baggage. A piano comes with a whole history of music. There are all sorts of cultural conventions built into traditional instruments that tell you where and when that instrument comes from. When you play an instrument that does not have any such historical background you are designing sound basically. You're designing a new instrument. That's what a synthesiser is essentially. It's a constantly unfinished instrument. You finish it when you tweak it, and play around with it, and decide how to use it. You can combine a number of cultural references into one new thing. [...] They are a very new instrument. They are constantly renewing so people do not have time to build long relationships with them. So you tend to hear more of the technology and less of the rapport. It can sound less human. However ! That is changing. And there is a prediction that I made a few years ago that I'm very pleased to see is coming true – synthesisers that have inconsistency built into them. I have always wanted them to be less consistent. I like it that one note can be louder than the note next to it."

On the naming of things:

"My interest in making music has been to create something that does not exist that I would like to listen to, not because I wanted a job as a musician. I wanted to hear music that had not yet happened, by putting together things that suggested a new thing which did not yet exist. It's like having a ready-made formula if you are able to read it. One of the innovations of ambient music was leaving out the idea that there should be melody or words or a beat… so in a way that was music designed by leaving things out – that can be a form of innovation, knowing what to leave out. All the signs were in the air all around with ambient music in the mid 1970s, and other people were doing a similar thing. I just gave it a name. Which is exactly what it needed. A name. A name. Giving something a name can be just the same as inventing it. By naming something you create a difference. You say that this is now real. Names are very important."

On the end of an era:

"I think records were just a little bubble through time and those who made a living from them for a while were lucky. There is no reason why anyone should have made so much money from selling records except that everything was right for this period of time. I always knew it would run out sooner or later. It couldn't last, and now it's running out. I don't particularly care that it is and like the way things are going. The record age was just a blip. It was a bit like if you had a source of whale blubber in the 1840s and it could be used as fuel. Before gas came along, if you traded in whale blubber, you were the richest man on Earth. Then gas came along and you'd be stuck with your whale blubber. Sorry mate – history's moving along. Recorded music equals whale blubber. Eventually, something else will replace it."