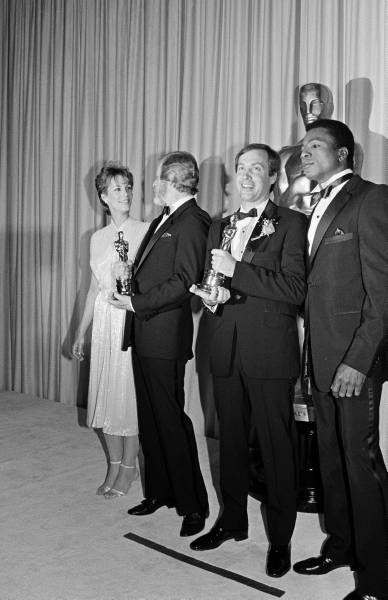 [The winners of Academy Awards for Best Sound Effects Editing: Ben Burtt and Charles L. Campbell with Jamie Lee Curtis, Carl Weathers -1983]
The Hollywood Post Alliance has announced that Ben Burtt will receive the organization’s Charles S. Swartz Award for Outstanding Contribution in the Field of Post Production, recognizing his powerful artistic impact on the industry. The award will be bestowed on Mr. Burtt on November 12th during the Hollywood Post Alliance Awards gala at the Skirball Center in Los Angeles.

HPA Awards co-founder and committee chair Carolyn Giardina said, “We are thrilled to recognize Ben Burtt with the Charles S. Swartz Award, an honor that represents everything that the HPA stands for; creativity, technical excellence, and limitless thinking. From R2 D2 to WALL-E, Ben Burtt has helped create some of the most unforgettable characters of our generation. We are honored to present this award to him.”

The Charles S. Swartz Award was created to honor individuals who have made outstanding contributions to the field of post production; an industry in a state of an expanding creative palette and of dynamic transition as a result of digital technologies and societal changes. The award was named in honor of the late Charles Swartz, who led the Entertainment Technology Center at the University of Southern California from 2002 until 2006 and helped to build it into the industry’s premiere test bed for new digital cinema technologies. In addition to a long and successful career as producer, educator and consultant, Mr. Swartz served on the Board of Directors of the HPA. Leon Silverman, President of the HPA noted that “Ben Burtt’s career and accomplishments speak to the true spirit of this award, which recognizes impactful contributions. Ben Burtt’s impact to the art and craft of post production and to our cultural legacy should be celebrated. ”

[via blog.digitalcontentproducer.com]
published by Matteo Milani at 9/17/2009