Murray Spivak was one of the premier and earliest sound editors. In the 1933 he created awesome sounds for King Kong by going out in the field and recording lions, tigers and other natural beasts, bringing the sounds into the studio and speeding them up, slowing them down or whatever.


To create Kong's roar, Spivak went to Selig Zoo and recorded the growls of lions and tigers. He spliced the growl together and then played them backwards at a really low speed (which lowered their tone an octave, making the growls sound like they coming out of much bigger animals) as he re-recorded them. [...] For Kong's distinctive love grunts, Spivak recorded himself grunting into a megaphone and then re-recorded the results at slow speed.
To create the sound of Kong's footsteps, Spivak wrapped plungers in foam rubber and stomped them across a box filled with gravel.
Kong's chest beats proved to be one of Spivak's biggest challenges. Spivak tried striking his assistant Walter Elliott on the chest with the drumstick while a microphone was held up to Elliott's back. The resulting sound was the one they ended up using.
On the advice of a vertebrate paleontologist from the Natural History Museum of Los Angeles County, Spivak decided to have the dinosaurs hiss and croak rather than roar. To create the hissing sound, Spivak recorded the noises from a compressed air machine. He did the croaking himself. For the T-rex, Spivak mixed in a backward recording of a panther growl. Spivak used an elephant's roar for the Triceratopses (before they were cut, of course) and some bird squawks for the Pteranodon. Bellows were employed to create the sound of the creatures' heavy breathing. All of the sounds were re-recorded at a slow speed to create a lower tone. 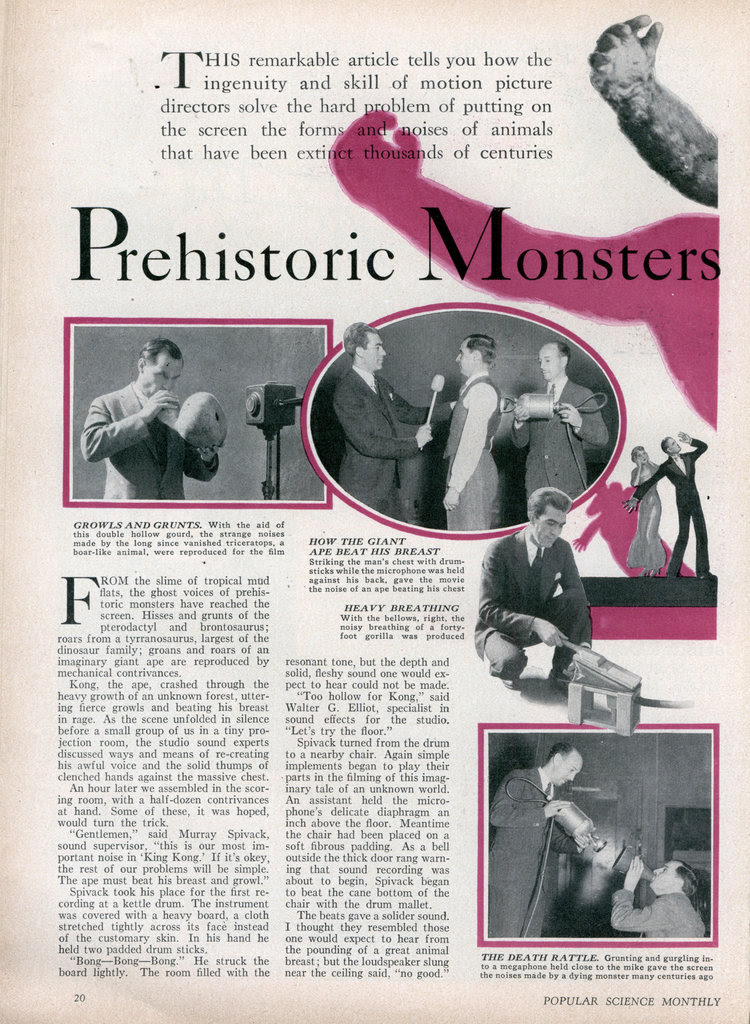 
In the end, Ben Burtt (Rydstrom's mentor) in his own words.

EGM: Who have been your mentors in sound design?


BB: First, there was Murray Spivak at RKO [co-winner of the 1969 Best Sound Oscar for Hello Dolly!], who created the sound effects for the original King Kong in 1933. His work in King Kong was the beginning of sound design for fantasy motion pictures. The voice of Kong, the sounds of the jungle, the creatures, and the screams—all were individually created and nothing like it existed before. He was able to mix two, perhaps three tracks together at a time, using two optical playback machines, making a loop and blending things together. When people make monster movies today, they still don’t gravitate far from those principles and techniques.

Read more: [Behind the Scenes With Movie Sound Fakers | Movie Sounds from Queer Machines - via Modern Mechanix]
published by Matteo Milani at 7/19/2009