Deep Green, a new iPhone OS chess application, is out now on Apple Store. It's developed by Joachim Bondo.
This iPhone App is extremely accurate and detailed, also in sound: it was designed by Diego Stocco, who's described to us part of the process to develop the sound effects. These sounds play a big role in augmenting the "real" experience of playing chess on the multitouch device.

Diego is a composer and sound designer working in films, video games and virtual instruments.
He's one of the main sound designers for the multi Award winning Spectrasonics instruments Atmosphere™, Stylus™ RMX and the new Power Synth Omnisphere™. He produces music for Epic Score, a well known L.A. based company specialized in trailer music. Recently Diego completed the score for "The Conduit" a futuristic game for Wii produced by High Voltage Software and published by SEGA.

"The sound design for iPhone is an interesting thing to me, especially with the options offered by the newer version of the OS, it will increase the technical and creative possibilities" - says Diego. 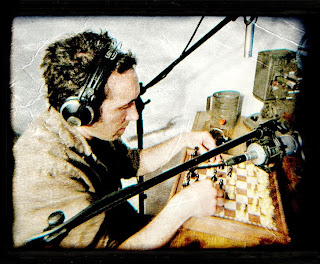 [Diego recording the sounds of individual pieces, move on the chessboard, laid on the desk...]
"The game is really done well and has a lot of sounds associated with any movement. I recorded the sounds of the chess game itself, and various other noises using mainly vintage material. Another interesting thing is that the sound is randomized within the game, every time you move a piece on the board, the sound is different, and the same goes for the engine of Deep Green. The basic idea was to return an analog game experience, combined with a steampunk style." 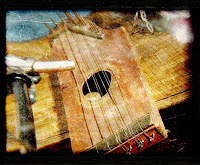 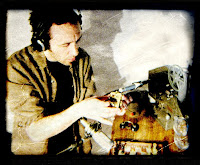 [Diego recording the alarm clock used to create the sound for the Deep Green engine, combined with other mechanical noises] 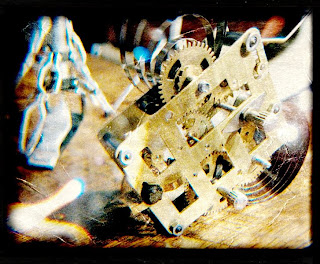 [The mechanism of the old alarm clock]
[you can reach Diego at diegostocco.com]
[Watch/hear: Playback demo.mov]
published by Matteo Milani at 5/19/2009