An interview with Tomlinson Holman, pt. 2

MM: You've invented a system that is a signal processing chain of different products, blending knowledge, math, material, and so forth. How did you manage this huge work of taking care of each small step during its development?

TH: With a lot of help, which I credited in the THX Manual. The ideas did come from many sources, some dating to the 1930's whereas some were brand new in 1980. It was my skill to: go to the MIT library and read the whole field within a week of getting the job (I was in Boston at my company 'Apt Corporation' at the time), selecting from amongst those developments the ones that made sense; working with John Eargle at JBL to find real products that would meet the standard sought; to assemble and figure out how to measure them; to exchange measurements with, and have experiments conducted, at Waterloo University (Stan Lipshitz, now retired, and John Vanderkooy); to select the LR4 crossover and get help in implementing it; to figure out how to make delay lines and fit poles and zeros with which I had help from Gordon Jacobs; then to build the crossover networks, find a manufacturer, etc. So there was lots of help but I performed an integration and leadership function.

The invention came about after it was nearly finished. Standing one day at the base of a wall that contained the system, with my head stuck between the wall and screen, I heard lots and lots of high-frequency energy, and figured out that this was from multiple bounces between the wall and screen. The wall was needed to support low frequencies but was a problem at high frequencies, so covering the wall in high-frequency absorbing material made it disappear acoustically at high frequencies. That's the patent: more a "discovery" than an "invention" that I set out to do. 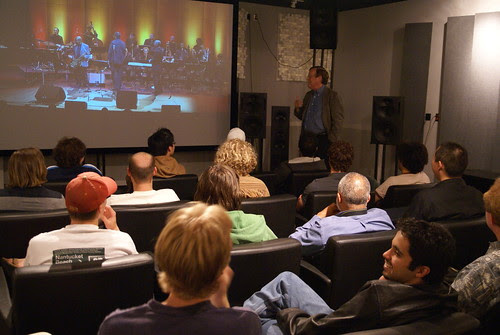 [Holman Talking About 10.2 Possibilities - via sklathill]

MM: How was the relationship with Dolby Laboratories? What's the output of your collaboration at that time?

TH: Dolby set the stage by improving film sound to the point where THX was worth doing. While they concentrated on the pipeline to get program material from studio to cinema and home, I concentrated on what happened to it once it was delivered. So they were compatible completely, although some ignorant parts of the marketplace thought one was supplanting the other and vice versa. Never was true.

By the mid-'80s, Lucasfilm and Dolby labs were ping-pongin developments - "technological leapfrog" Tom Holman called it. Dolby was pushing improvements for recording sound on film and playing it back with expanded frequency and dynamic ranges; Lucasfilm focused on the auditorium.
In 1987, a committee of audio engineers debated the number of channels for digital sound on film. It was lively debate about a range between two and eight channels; Holman proposed 5.1 - five main channels and a dedicated sub-woofer channel. (Technically speaking, the sub-woofer represented 0.005 of a channel in bandwidth. "I call that marketing rounding!" said Holman.) 5.1 Surround Sound became the industry standard.
[excerpt from Droidmaker]


MM: What was exactly the Lucasfilm's Theater Alignment Program? It was an early version of THX?

TH: No, it was a companion program to see that all theaters were tuned up to the best of their ability and consisted of lab viewing of 70 mm prints, installation tune-up by certified technicians, and viewing by trained people separate from the technicians with feedback to Lucasfilm, and end-to-end quality control for films in theaters. It ran a number of years on a lot of films but didn't make any money.


MM: Few words on the development of Home THX.

TH: I went to CES (Consumer Electronics Show) in the mid-80's and found misrepresentations of the work of Ben Burtt and others, some of it deliberate, and some of it from a lack of knowledge. So I set our to better represent movies over home systems, and Home THX with its patented technology is the result. It also had a "better housekeeping seal of approval" component, especially in areas where people routinely stretched the truth, such as power amplifier output capacity. We used loudspeakers to test, not resistors, and some high-end products simply failed to pass the standard based on real program material into real loads.


MM: When (and why) did you move away from Lucasfilm?

TH: I started teaching at USC in 1987 and working at Lucasfilm mainly in THX by that point from 1987 to 1994, but it was a hard road to hoe to have two jobs, one in northern and one in southern California, so the dye was cast with the completion of the Technical Building in 1987, the design and building of which occupied three years of 60 hour plus weeks for me.

Tom Holman had succeeded beyond everyone's expectations in his execution of C Building; he produced some of the most remarkable filmmaking workspaces ever, and, in the process, launched the TAP/THX projects. After testing out numerous ideas on Kerner, Holman transitioned into working full time on the engineering specifications for the 750,000 square foot Technical Building.
[excerpt from Droidmaker]

In the 'Stag Theater' at Skywalker Ranch it's twenty-two speakers all-around which are positioned for uniformity of coverage. The multiple arrival times screw up your ability to localize any one sound. A lot of things in the Tech Building are all hidden from view on purpose, because if you don't see one, you don't locate one.
[excerpt from Sound-On-Film]
[Prev | 1 | 2 | 3 | Next]
published by Matteo Milani at 4/22/2009