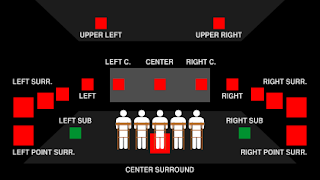 5.1 was named by Tomlinson Holman in 1987 and came out on film in 1992 and became popular since then. What comes after this is the addition of more channels and from that comes the 10.2 sound system which is twice as good as 5.1. How far the number of channels can go is known and largely speculated but the most logical answer at the moment is 10.2.
The purpose of 10.2 is to allow much greater flexibility for sound designers and create a far more immersive environment for the audience. With these channels, it is possible to recreate the acoustics of nearly any location with astonishing realism. Holman found that the second most important sound wave to hit the audience - after the one from the source - is the one that comes from a point on the ceiling, halfway between them. This is because most rooms have hard and reflective ceilings, but the walls are semi-absorptive due to objects in the room; while the floor, usually covered with carpet, absorbs most of the reflected sound. So this first, overhead reflection reaches the ear at a slightly different time, allowing the brain to both localize the primary sound and compute the size of the room. By placing two speakers 45° above and to the left and right the audience, this key sound wave can be recreated. The other speakers can fill in the other major reverberations from the sides and off the back of the room, recreating a full acoustic signature. The strength of traditional 5.1 surround is that its left and right surround speakers are diffuse; they spread the sound around the entire area. This helps to prevent the " Exit Sign Effect" - audience members looking away from the screen at the source of a localized sound, not realizing it is part of the movie. However, this diffusion carries a cost in flexibility. Therefore 10.2 augments the LS (left surround) and RS (right surround) channels by two point surround channels that can more finely manipulate sound - allowing the mixer to shift sounds in a distinct 360° circle around the movie watcher.
The .2 of the 10.2 refers to the addition of a second subwoofer. The system is bass managed such that all the speakers on the left side use the left sub and all the speakers on the right use the right sub. The Center and Back Surround speaker are split between the two subs. The two subs also serve as two discrete LFE (Low Frequency Effects) channels. Although low frequencies are not localizable, it was found that splitting the bass on either side of the audience increases the sense of envelopment.
[read the full article - via uscsoundconscious]
[tmhlabs.com]
published by Matteo Milani at 12/09/2007